May 25, 2022Written by Jim LeFebvre
>
> Sad news, I had not heard about this until just now.
>
>
>
> For those of you who have known Bill, he is an icon in the motorcycle world. Both he and Ed Kretz Jr. were competitors back in the day of motorcycle racing and even both courted the same lady who eventually married Bill. Some years back, they were both at the BMAC meeting at the Yukon Tavern and told the club about their past history. Both were inducted into the AMA Hall of fame! How cool is it have had a couple of great guys like this as part of our club.
>
>
>
> Bills first wife passed many years ago and I attended the celebration of life at their church In Colorado Springs with a number of other BMAC members. He was really bummed out since she was an avid motorcycle rider herself, and they always did great road trips together. Her loss was a big hit to his spirit and we didn’t hear much from him for some time.
>
>
>
> Then, at a high school reunion, he met an old classmate of his (Suzy). They blew off the dust of decades not in touch and one thing led to another and they courted and got married. I remember hearing that when Suzy went over Bill’s house in Colorado Springs for the first time, she showed up on a motor scooter. I can’t help but think that sealed the deal and they were an item after that.
>
>
>
> I tried to lure Bill to our Saturday meetings, but Suzy was running a relationship counseling program for couples on Saturday’s, and Bill was her able assistant. When I pitched him asking for a “leave of absence” to come to the BMAC, his reply was “their time as limited and he wanted to spend as much of it with her as possible”. A lesson learned from his prior marriage. I am certain he had no idea how soon the clock would run out. Bill and Suzy epitomized my “Carpe Diem” philosophy and he is still pressing on with her gone now.
>
>
>
> So, all that said, I would ask that any of you who knew (or would like to know) Bill would consider attending the June 18th memorial service in La Veta, CO. I am going to be in Europe then and not able to attend. Might even turn lemons into lemonade and make a club “out of schedule” ride to represent all his friends at the BMAC. I know that would have a lot of special meaning to him. Even though he moved to La Vita several years ago, he has been active in the BMAC by being one of the technical judges for the Christmas club competitions every year so he is still near and dear to us all.
>
>
>
> I hope you guys can do something or check the obit to see if they have designated donations for any charity or other group we could pony up a small contribution.
>
>
>
> Gary (club ride), John and Jim (contribution/donation) at least case send a card to Bill. How about someone picks up a “sympathy at your loss” card and we sign off on it at the June meeting and then mail it prior to the event in La Vita? Gary, if you could concoct a ride plan, bring the proposal to the meeting June 4 for discussion.
>
>
>
> Time flies, let’s get out and ride and keep our friends both present and passed in our thoughts and prayers.
>
>
>
> Thanks,
> JERRY
>
>
>
>
>
>
>
>
>
>
>
> From: Bill Brokaw <sbbrokaw@centurylink.net>
> Sent: Wednesday, May 25, 2022 12:30 PM
> To: Bill Brokaw <sbbrokaw@centurylink.net>
> Subject: Suzi Burkhart Brokaw’s Memorial
>
>
>
>
>
> The date is set for Suzi Burkhart Brokaw’s memorial service: June 18t,h 1 to 3PM at her last home, 764 Arrowhead Dr., La Veta, CO 81055.
>
>
>
> In the wee town of La Veta turn east on Virginia at the Catholic Church on Main St. (Hwy 12) and follow your nose for 1.8 miles then park on the side of the road. Please bring your camp chair.
>
>
>
> RSVP is not required but it would be nice. 719-742-6036 or sbbrokaw@centurylink.net
>
>
>
> Hope to see you there. Bill Brokaw and the Brokaw, Burkhart and Dupree family.
>
>
>
> P.S. If any of you did not receive Suzi’s Obituary and would like to, I will email when requested. Bill
>
>
> 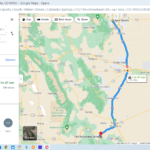 All Categories
For Sale
Minutes
News
Photos
Technical
Other